Command Professional Edition v2.0 is built on the battle-hardened foundations of Command Modern Operations, the successor to CMO and winner of the Charles S. Roberts 2019 award for the best modern era wargame. Command Modern Operations introduced a large number of groundbreaking features both on user interface and simulation mechanics and Command PE v.2.0 inherits them together with 18 months of refinements & improvements.

Run as non-admin: CPEv2 offers a revised filesystem layout for its writable data, which enables the application to run in a restricted (ie. non-administrator) mode. This makes it possible to install and run CPE in high-security environments where admin powers for an application are a non-starter.

High-resolution terrain: While it can still use CMANO/CPEv1’s DTED-0 level terrain elevation set, CPEv2 now also offers the option to use a global-scale SRTM3-format terrain dataset with 90m/cell resolution (DTED-1 equivalent). When activated, the higher resolution automatically applies to calculations dealing with the terrain elevation, such as terrain slope for ground units navigation, line of sight, surface/bottom clutter for look-down sensors

Distinct mobile ground units: In addition to modelling mobile forces as “aimpoint facilities” it is now possible to explicitly model individual vehicles with their own customized properties such as armor, propulsion, mounts, sensors etc. These new units now have their separate data annex ("Ground Units"), and can be browsed on the DB viewer 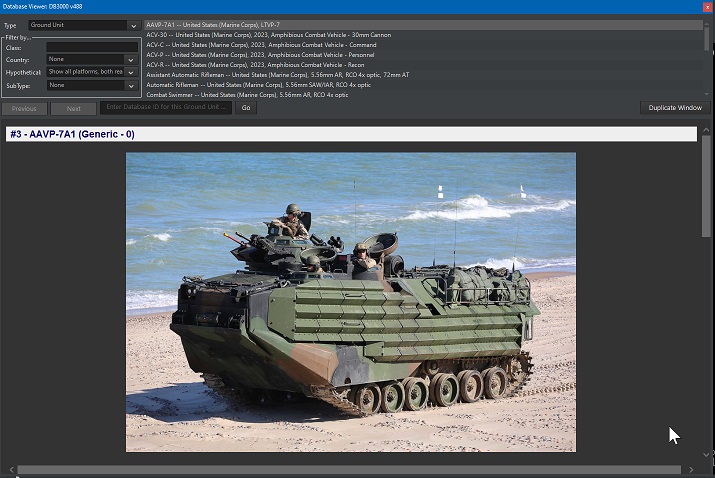 The presets work with any unit type and allow quickly positioning units relative to each other and to the group’s lead. You can either assign the relative positions to the group units or, if in ScenEdit mode, directly “teleport” the members to their assigned positions.

Interactive-mode CLI: You can now launch a CLI instance in interactive mode, using the Lua TCP-socket as the control interface. This ability combines the high-performance, low overhead and parallel execution benefits of CLI with the full-control interactivity of the full-GUI client.

Energy-based boost-coast missile model: Most rocket-boosted missile weapons now use a realistic energy-based flight model: After their initial boost, they coast and lose speed due to atmospheric drag (variable with speed and altitude), especially when they manouver, and also gain & lose speed as they dive and climb respectively. Aircraft default evasion tactics have also been adjusted to this new reality, and aircraft will actively attempt to drag/outrun incoming missiles with beaming used only as a last resort. Detection ranges for incoming missiles have also been significantly reduced in most cases, which makes it harder to visually pick up missiles at long range and outrun them (this also reinforces the importance of automated missile-warning systems).

Improved ballistic missile & ABM modelling: Ballistic missiles now use true-to-life trajectories depending on their range profile (with accurate burnout elevation angle, velocity, altitude and apogee figures), and MIRVed missiles release their re-entry vehicles sequentially instead of all of them at the same.
ABM missiles also have improved kinematic & guidance profiles, and the interception altitude envelope limitation is taken into account during the pre-fire checklist (e.g. SM-3 will not fire against incoming BM/RV if the estimated intercept point is within the atmosphere).
Combined, these changes model much more faithfully the challenges of BMD siting, engagement windows and general operations.

New sensor type: Passive radar (PCLS): For a general background on PCLS. PCLS systems can be very useful both as a covert means of airspace surveillance and as a potent counter-VLO asset to be combined with other, more traditional sensors. They do have several drawbacks and vulnerabilities (for example, they can be limited in altitude coverage because of their bistatic nature, and each receiver must have clear LOS to both the target and the transmitter in order to process the reflection), but as long as these can be accommodated, PCLS sensors can significantly enhance an IADS and complicate enemy efforts to disrupt it.

Offline map layers: All map layers (apart from those provided externally by Stamen Design) are now bundled in their entirety as part of the installation (including, optionally, the massive “Sentinel-2 Cloudless” layer) and can thus be used in offline machines. This greatly enhances map quality and performance in systems that are isolated from the Internet (incl. highly-secure networks).

New bathymetry layer: The “Relief” map layer has been enhanced with its marine counterpart, a rich bathymetric map that illustrates the differences in bottom depth on different map locations. An example screenshot: 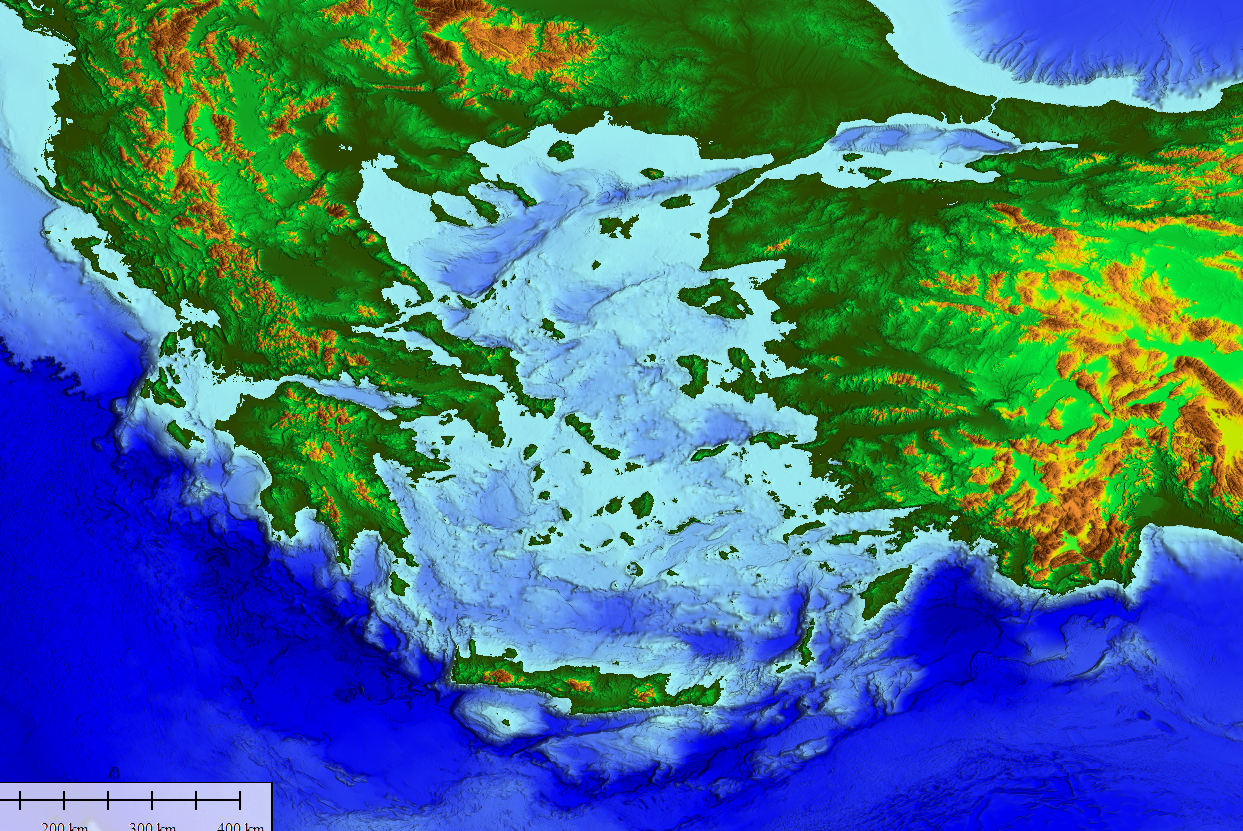 Sim-pulse control on MC & CLI: Users can now configure the simulation pulse time-slice (coarse or finegrained) while running a scenario in Monte-Carlo mode or while using the command-line edition. This allows better control between performance and fidelity in simulation execution.

Benchmark mode: This provides an objective way to measure & compare a system’s performance and suitability for CPE, by repeatedly running any selected scenario in headless mode (similar to Monte-Carlo execution, but without any analysis results). The execution is run using finegrained pulse mode (ie. 0.1-sec pulses) in order to stress-test the simulation engine and the hardware resources.

Database selection improvements: The “Database” section of the Editor menu has been significantly redesigned for ease of use. Instead of a long list of available registered & custom DBs to choose from, only the latest registered DB3000 & CWDB databases are displayed for quick selection, along with the option to manually select another database to load from the file system. It is also now possible to directly select a specific DB to migrate a scenario to:

New satellite-pass prediction UI: Apart from the classic tabular format for presenting forthcoming satellite passes and dwell times over a specified point, an additional graphical view has been added, which makes it easier to visualize the same information. Example screenshot: 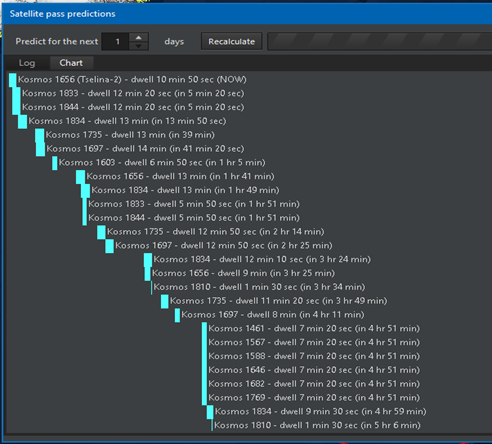 Area & reference-point manager: This offers a centralized interface for editing reference points on large-scale scenarios. Ref-points and zones can be organized by tagging and visually distinguished by different colors: 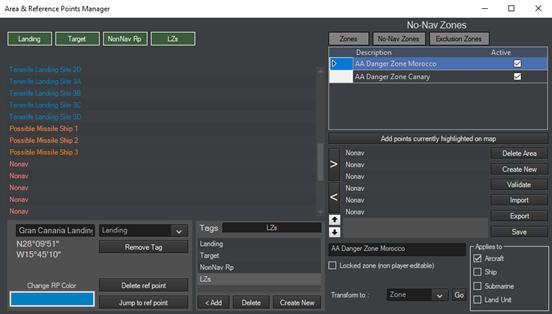